7 Ways to Survive a Nuclear Incident

Surviving a nuclear incident, for example a dirty bomb, nuclear reactor accident, or nuclear explosion, seems to many people to be impossible. They assume it’s impossible to survive such an event, so they decide they will just give up and die. I have had many people tell me that they would prefer to die in a nuclear war than survive. While any type of nuclear incident would be horrific, with a bit of knowledge it is possible to survive and go on with life.

The most important survival tool that you need is knowledge. The following points are information you should study and learn.

1. First, there are two types of radiation associated with a nuclear explosion that you should know about. The first is the initial nuclear radiation from the blast. If you are exposed to this, you are probably dead.

However, the second type of radiation, Residual Nuclear Radiation, is different. This radiation is mostly from the radioactive fallout. This radiation comes from the weapon debris, fission products, and, in the case of a ground burst, irradiated soil.  There are over 300 different fission products that may result from a fission reaction. Many of these are radioactive with widely differing half-lives.  Some are very short, i.e., fractions of a second, while a few are long enough that the materials can be a hazard for months or years.  Their principal mode of decay is by the emission of beta particles and gamma radiation. The bombs dropped on Japan were airbursts and caused very few deaths from radiation.  Cancer deaths that occurred much later are for another discussion.

2. A ground burst will produce much more fallout than an air burst.  In a nuclear war, most countries would use airbursts; they create damage over a larger area, but minimize radioactive fallout. Terrorists would probably use a ground burst because they would want to cause radiation damage and fallout. 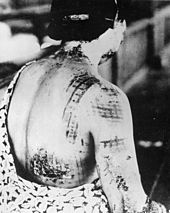 Burns visible on a woman in Hiroshima during the blast. Darker colors of her kimono at the time of detonation correspond to clearly visible burns on the skin which touched parts of the garment exposed to thermal radiation. Since kimonos are not form-fitting attire, some parts not directly touching her skin are visible as breaks in the pattern, and the tighter-fitting areas approaching the waistline have a much more well-defined pattern.

3. Avoid looking at a distant nuclear blast. Flash blindness is caused by the initial brilliant flash of light. More light energy is received on the retina than can be tolerated, but less than is required for irreversible injury. This results in temporary damage to the visual pigments of the eye, and temporary blindness for up to 40 minutes.  If you have the fireball directly in your field of vision, it is possible to get a retina burn that can permanently damage your vision up to and including blindness.

4. This same flash that can damage your eyes can cause thermal burns. When thermal radiation strikes an object, part will be reflected, part transmitted, and the rest absorbed. The fraction that is absorbed depends on the nature and color of the material.  A thin material may transmit a lot. A light colored object may reflect much of the radiation and thus escape damage, like anti-flash white paint.  The absorbed thermal radiation raises the temperature of the surface and results in scorching, charring, and burning of wood, paper, fabrics, etc.  If the material is a poor thermal conductor, the heat is confined to the surface of the material. Depending on your distance from the blast, it is possible that the flash can ignite fires.

5. Duck and cover – This has been made fun of in the media on many occasions, but in reality it is a good idea. Depending on your distance from the blast, it can protect you from possible blast damage. It also protects you from flash burns and blindness.  This is something that can save your life.

6. Learn how to find cover and what shelter factors protect you from the effects of radiation. The book Nuclear Warfare Survival Skills is an excellent reference on this subject.  It teaches the 7:10 rule. Assume that a 1 megaton bomb blast occurs and you are sheltered or far enough away to survive the blast if fallout of 1000 Rads arrives at your location 1 hour after the blast.  A 450 Rad accumulative dose can kill you, so one-half hour of unsheltered exposure can be fatal.  If you have shelter and are using the 7:10 rule, you will know that after seven hours the outside rate will drop to 100 Rads per hour.  In another 7 times 7, or forty-nine hours, it will have decayed down to 10 Rads per hour. Then using the rule of seven times forty-nine hours which equals approximately two weeks it will be down to one Rad per hour. You need to stay sheltered until it drops to one-half Rad per hour, and that takes about twenty-five days total.

7. You and dirty bombs.  As you know, there has been a lot of concern about terrorists getting their hands on nuclear materials and setting off a dirty bomb. Studies have shown that members of the public are more likely to be harmed by the impact of the conventional explosives than that of the radioactive materials.  A dirty bomb would spread radioactive materials, contaminating the local area and any individuals in the nearby vicinity.  However, this contamination would be mostly external in nature, and if the attack was promptly identified as being radioactive, decontamination of individuals would be a relatively straightforward process.  The exposure time of anyone affected would be limited and the negative health effects mitigated.  There would be no nuclear explosion and the radiation would only be scattered within the blast radius.

Hopefully this will provide you with some information that will help you understand some of the ways in which you can mitigate the effects of a nuclear incident.  Take the time to study this problem and Build a Nuclear Go Bag for Fallout or Radioactive Incidents.