All about rice: a tutorial 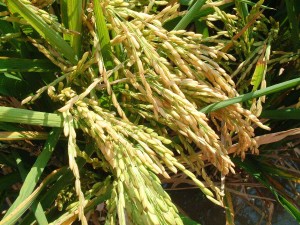 Rice is inexpensive, easy to store, and is a versatile, economical food. It is a good source of energy and can supply vitamins and minerals to the diet. It is generally classified as a grain, but in family meals, it can be used as:

Rice has been in use since ancient times. It is easy to store, takes little storage space, and has no waste since it is completely edible. Even though there are 7,000 varieties of rice produced in the world, for our purposes you only need to know that there are only three different lengths of rice grain and four different kinds.

Long grain rice has a length that is four to five times its width. The grains are clear and translucent. The grains remain distinct and separate after cooking.

Medium grain rice is about three times as long as its width. This type is less expensive than long grain rice because it requires a shorter growing season and produces a higher yield per acre. It is also easier to mill than the long grained variety.

Short grain rice is only one and one-half to two times as long as it is wide. It is generally the least expensive of the three lengths.

With four different kinds of rice to select from, you should know the differences.

Brown rice is the whole, unpolished grain of rice with only the outer fibrous, inedible hull removed. It is more nutritious than white rice. Brown rice requires more water and longer cooking time than white rice. Because its shelf life is very short it is not a good item for long-term storage. Store brown rice for only six months.

White rice this is rice from which the hulls, germ, outer bran layers and most of the inner bran is removed in the milling process. The grains are bland in flavor and are fluffy when cooked. This rice properly packaged oxygen free will store for up to 30 years.

Parboiled rice, sometimes called processed or converted rice, it has been treated to keep some of the natural vitamins and minerals the whole grain contains. It has been cooked before milling by a special steam pressure process. It requires longer cooking time than regular milled white rice, but after cooking, the grains are fluffy, separate and plump. According to Brigham Young University, parboiled rice that is properly packaged will store for up to 30 years.

All rice sold in the US has to be fortified with B1, B3, and iron by law.

Rice is a good healthy inexpensive food to add to your storage.