Getting Started With Dumpster Diving

Sometime back in the early nineties I was between jobs, having been laid off and was trying to broker some printing jobs in Denver. During the course of my attempts to sell printing I drove by a large bookstore, and being the bibliophile I am, I had to stop in and do some browsing.

In the very large self-sufficiency section I came across The Art & Science of Dumpster Diving by John Hoffman. Just a few seconds of flipping pages convinced me I needed this book. I paid some ungodly retail price and took it home with me. It turned me on to a very interesting and useful hobby. In fact the very first dumpster I looked into I found a tool box half full of tools.

What is Dumpster Diving?

Dumpster diving is simply looking through dumpsters for useful items that people throw away. These items can include building materials, furniture, books, tools, clothes, food and even CASH! There is a chance of finding most anything in a dumpster.

Yes and no. If you look in the dumpster behind a local restaurant be prepared for some slimy and disgusting things. Avoid places like that and it will be a much nicer experience. Most dumpsters are filled with packaging. That is, cardboard and plastic, nothing real icky. Clean cardboard, though, has many, many uses. You may want to pick it up and begin a stash of clean, flattened cardboard boxes and other packing material you find. This can be helpful with packing food storage and other survival supplies.

So where do I look?

The number one place on my list is apartment complex dumpsters at the end of the month. People moving will throw away perfectly good items they don’t want to move. Many times they will place it beside the dumpster for people like us to pick up and use. I have also noticed how they will box up all their pantry food and leave it in a box beside the dumpster with the other good stuff.

Even better, but only once a year, are the dorm dumpsters at your local college during spring move out days. There’s no telling what college kids, anxious to leave campus, might throw out.

I like strip malls. For some reason, people throw out good stuff behind some of them.

Construction sites are great for building materials, but make sure and ask permission to go through the “SCRAP”. Most foremen will gladly let you if you ask nicely.

If you are looking for food, the grocery store dumpster is the place to go.

Food ? From a dumpster!? 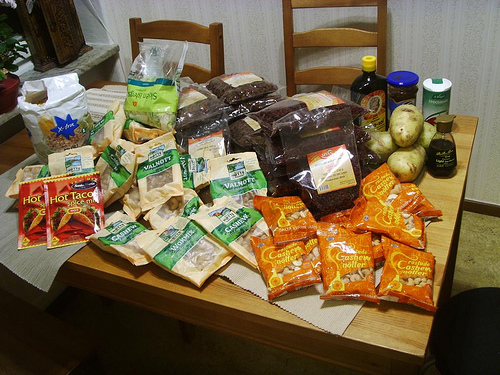 This is a real-life haul from a dumpster.

I have a couple of rules of my own for grocery stuff. I take meat only in winter unless it is still frozen, and other food only in original packaging.

You never know what will be expiring when you look in a grocery dumpster. I have loaded up on spiral cut hams, still frozen solid, a trunk full of frozen gourmet pizza, and my personal favorite, the bakery department that fills an industrial size clear garbage bag with out dated high-end loaves of bread, bagels and pies.

But what if someone sees me?

Let me share my experience with what Hoffman calls the ninja effect. I was rummaging through a few dumpsters at our local college move out days a few years ago. I was picking out some good stuff when one of my best friends walked by running an errand to the college. He looked right through me from about two feet away. I called him by name as he went past and it took a few seconds for him to realize who I was. People don’t want to see other people “digging in the garbage” so they kind of tune them out. So don’t sweat it, people will see you but they really won’t.

You want to keep yourself neat and fairly clean so you look like an honest, hard working person who might be down on their luck, rather than an unkempt homeless person who may or may not be dangerous.

What tools will I need?

You really don’t need anything but a good pair of shoes, since there is lots of broken glass around dumpsters. Gloves are a good idea. A flashlight is very helpful if you dive at night or in the evening. Keep it small and cheap since you might lose it in a dumpster somewhere. I like to carry a cane since it helps pull things to you that you would otherwise not be able to reach. Plus it provides a measure of protection.

Will I get in trouble?

Some towns have ordinances against dumpster diving, but most don’t.

If you are confronted by the police my advice is to always tell the truth. They hate it when you lie to them. If asked what I am doing I say, “I’m just seeing if there is anything interesting in the dumpster”.

The same goes for security guards, apartment managers and grocery store managers. Be respectful and if they tell you to get lost, then get lost and try somewhere else.

Once you have done some dumpster diving you may look at it like I do. It’s Christmas every day, since you never know what someone will toss in a dumpster. Their trash is my treasure.