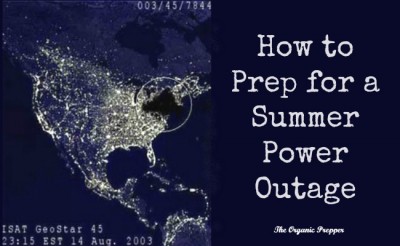 How to Prep for a Summer Power Outage

Sometimes people think that a summer power outage is easier to deal with than a winter one. After all, in the summer, you don’t have to worry about freezing to death, which is a very real threat during a long-lasting winter outage.

However, a summer power outage carries its own set of problems. Foremost are heat-related illnesses and the higher potential of spoilage for your food.

Even if you aren’t convinced that hardcore preparedness is for you, it would still be difficult to argue against the possibility of a disaster that takes out the power for a couple of weeks. Basic emergency preparedenss is important for everyone

, not just us “crazy preppers.”

Just ask the people who lived through the Derecho of 2012 how unpleasant it was.  Severe, fast-moving thunderstorms (called derechos) swept through Indiana, Ohio, Virginia, West Virginia, Pennsylvania, Maryland, New Jersey, and Washington DC. Millions lost power, an estimated 4 million for an entire week. As if a week-long power outage wasn’t miserable enough, that part of the country was in the midst of a record-setting heatwave during the time period.

Also keep in mind that summer stresses our fragile power grid to the max, as everyone increases their usage of electricity to try and keep cool with air conditioners and fans. This ups the chances of an outage even when there’s not a cloud in the sky.

Back in 2003, a software bug caused an extremely widespread power outage in the middle of August. It was a very hot day, and increased energy demand overloaded the system. Because of the issue with the software, engineers were not alerted of this, and what should have been a small local outage turned into an event that took out power for over 10 million Canadians and 45 million Americans. I remember this one clearly because the little sub shop beside my workplace gave away all the perishable food that they had out at the time before it spoiled and I took home fresh sandwiches for my girls’ dinner that night. We sweated uncomfortably through the next two days until the power was restored.

Beware of dehydration and heat-related illnesses

On of the most serious concerns that sets apart a summer power outage from that of other times of the year is the heat. When you don’t have so much as a fan to move the air around, heat-related illnesses and dehydration are strong possibilities. From my book, The Prepper’s Water Survival Guide, here’s an excerpt from the chapter on dehydration:

Dehydration is the state that occurs when you use or lose more fluid than you take in, and your body doesn’t have enough water and other fluids to carry out its normal functions. Your electrolytes are out of balance., which can lead to increasingly serious problems.

Dehydration can lead to very serious side effects, including death.

Following are the most common dehydration-related ailments.

Heat cramps: Heat cramps are painful, brief muscle cramps. Muscles may spasm or jerk involuntarily. Heat cramps can occur during exercise or work in a hot environment or begin a few hours following such activities.

Heat exhaustion: Often accompanied by dehydration, heat exhaustion is a heat-related illness that can occur after you’ve been exposed to high temperatures.

There are two types of heat exhaustion:

Heat stroke: Heat stroke is the most serious form of heat injury and is considered a medical emergency. Heat stroke results from prolonged exposure to high temperatures—usually in combination with dehydration—which leads to failure of the body’s temperature control system. The medical definition of heat stroke is a core body temperature greater than 105°F, with complications involving the central nervous system that occur after exposure to high temperatures. Other common symptoms include nausea, seizures, confusion, disorientation, and, sometimes, loss of consciousness or coma.

Dehydration can lead to other potentially lethal complications. The Mayo Clinic offers the following examples:

How to Treat Dehydration

People who are suffering from dehydration must replace fluids and electrolytes. The most common way to do this is through oral rehydration therapy (ORT). In extreme cases, fluids must be given intravenously. In a disaster situation, hospitals may not be readily available, so every effort should be made to prevent the situation from reaching that level of severity.

Humans cannot survive without electrolytes, which are minerals in your blood and other bodily fluids that carry an electric charge. They are important because they are what your cells (especially those in your nerves, heart, and muscles) use to maintain voltages across cell membranes and to carry electrical impulses (nerve impulses and muscle contractions) across themselves and to other cells. Electrolytes, especially sodium, also help your body maintain its water balance.

Water itself does not contain electrolytes, but dehydration can cause serious electrolyte imbalances.

In most situations, avoid giving the dehydrated person salt tablets. Fresh, cool water is the best cure. In extreme temperatures or after very strenuous activities, electrolyte replacement drinks can be given. Sports drinks such as Gatorade can help replenish lost electrolytes. For children, rehydration beverages like Pedialyte can be helpful. (Source)

One of the best ways to avoid the heat-related problems above is to store lots of water.

You can’t always rely on the faucet in the kitchen. In the event of a disaster, the water may not run from the taps, and if it does, it might not be safe to drink, depending on the situation.  If there is a boil order in place, remember that if the power is out, boiling your water may not be as easy as turning on your stove. If you are on a well and don’t have a back-up in place, you won’t have running water.

Each family should store a two week supply of water. The rule of thumb for drinking water is 1 gallon per day, per person.  Don’t forget to stock water for your pets, also.

You can create your water supply very inexpensively.  Many people use clean 2-liter soda pop bottles to store tap water.  Others purchase the large 5-gallon jugs of filtered water from the grocery store and use them with a top-loading water dispenser

Try to keep cool during the blackout

This is easier said than done when it’s 105 and you can’t even run a fan.

I’m not a big user of air-conditioning, so I recently wrote an article about staying cool without it. Be sure to check it out HERE – there are some suggestions on keeping your house cool naturally that will help in the event of a power outage.

Here’s an excerpt from the article with some tips for keeping cool when the grid is down:

Be very conscious of food safety

If a power outage lasts for more than 4 hours, you need to err on the side of caution with regard to refrigerated and frozen food.  Coolers can help – you can put your most expensive perishables in a cooler and fill it with ice from the freezer to extend its lifespan. Whatever you do, don’t open the doors to the refrigerator and freezer. This will help it to maintain a cooler temperature for a longer time.

According to the Red Cross, if your freezer is half-filled and is not opened the entire time that the power is out, the food in it will remain sufficiently frozen for up to 24 hours. If it is completely filled, your food should remain safe for up to 48 hours.  If the worst happens and your freezer full of meat does spoil, keep in mind that most homeowner’s and renter’s insurance policies will pay for their replacement, but unless you’ve lost a whole lot or your deductible is very small, it may not be worth making a claim.

I strongly recommend the purchase of a digital, instant-read thermometer. This has many kitchen uses, but in the event of a disaster is worth its weight in gold for determining food safety.   You can use your thermometer with this chart (print it out so you have it on hand in the event of a down-grid emergency) to determine the safety of your food.
If a power-outage looks like it’s going to be lasting for quite some time, you can be proactive if you have canning supplies on hand and a propane burner, and you can pressure can your meat outdoors to preserve it.   If you decide to get one, THIS PROPANE BURNER

is probably the closest one to a kitchen stove out there. It works well for keeping your product cooking at a steady temperature. Don’t cheap out on this purchase, or you will stand there in front of this burner for a long, frustrating time and still end up with food that has not been canned safely. Be very careful to supervise the canning pot: you don’t want the pressure to drop to an unsafe level and you want to keep kids and pets away from this project.  Added bonus – when you have a propane burner like this, the sky is the limit as far as cooking in a power outage.Another way to combat the potential losses of a long-term summer power outage is to use other methods for preserving your feed. Canning and dehydration are not grid-dependent and can save you a whole lot of money and prevent a mess of rotting meat in your freezer.

Many preparedness concerns are the same, no matter what time of the year your power outage occurs. Here are some of the basic things you need for any power outage.