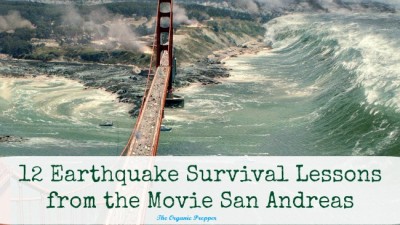 San Andreas for Preppers: 12 Earthquake Survival Lessons from the Movie

Nothing warms my prepper’s heart more than a good disaster movie that supports my hypotheses about a specific event, and the recent movie San Andreas

Okay, sure, there was some pretty unrealistic stuff like when The Rock was driving a boat through post-tsunami San Francisco and just happened to find his daughter that he was looking for. The last time I went to San Francisco, my daughter and I had trouble finding each other on the first floor of Forever 21, for crying out loud.

But, when you only have two hours for a movie, you have to be willing to suspend your disbelief somewhat and put that kind of stuff aside.  So. putting that aside, I enthusiastically recommend the movie. We live about 4 hours from San Francisco and go there occasionally for educational outings to the excellent museums, so the setting was quite familiar to us, as was the premise of what would occur if an earthquake happened there. So familiar that my daughter was the frequent recipient of my elbow, as I whispered, “See!!!! I told you this was what would happen if the Big One hit that time we went to the Science Museum!”  Trooper that she is, she said, “Yes, Mom, I know, you were right about that too.” Since she’s a teenager, she probably also rolled her eyes each time, but it was dark and I can’t be absolutely certain of that.

As I’ve said before, you can’t overestimate the value of finding entertainment that enhances your preparedness mindset. A movie is like the prepper version of a sporting event, where we can cheer, jeer, and scheme our ways through some imagined event. It engages our love for critical thinking while allowing us to take a break from our everyday activities. (Here’s my list of 40 prepper movies you can find online.) I know that some folks don’t go to the movies or engage in any form of popular culture, which is certainly a matter of personal choice. It’s not an everyday thing for us to go to the movies, but I’m of the firm belief that a prepared lifestyle doesn’t have to be bereft of fun, especially if you want your children to get involved.  I try to enjoy outings like this with my kids every once in a while.  We really liked the movie, and the special effects were incredible in 3D.

Here are 12 things that interested me, as a prepper, about San Andreas. I’ll try really hard to be vague enough that I don’t spoil the movie.

Have you seen the movie yet? What did you think? Do you have any survival lessons to add?