One of the first acronyms I learned as a new prepper was TEOTWAWKI.  The End Of The World As We Know It.  I knew from reading James Rawles’ Patriots that the end could come suddenly, within just a few days as America’s banking system collapsed upon itself.  Another, more drastic version was spelled out for me in an online article, “The One Hour Meltdown.”  Neither vision of the future was pleasant, but I was skeptical about the concept of a sudden economic collapse.

Instead, a slow decline, a de-evolution, of our lifestyles and our economy may be far more likely.  Continued high levels of unemployment, for example, are eroding away at America’s middle class.  Worse still, is the fact that long-term joblessness causes individuals and families to exhaust their savings, retirement funds, and max out credit cards in their attempt to stave off bankruptcy, evictions, and home foreclosures.  As each safety net is consumed, people become more and more entrenched in the growing underclass, and in today’s economy, it’s going to be more difficult than ever to recoup what has been lost.  TEOTWAWKI has become a reality for millions of Americans, and the slow decay continues.

The proof is in the numbers

Currently, around 48 million Americans are living below the poverty level, measured by an income of $24,230 or less for a family of four.  The median income has decreased to levels seen in the mid-1990’s. Depending on whose numbers you trust, the unemployment level is either 5%, according to the federal government, or upwards of 25%.

The unemployment rate depends largely on where you live and the health of local business and industry. As the oil and gas industry has taken a huge hit in 2015, employment in this areas, as well as other related businesses, has dropped. A few years ago on a road trip, we stopped in Yuma, Arizona, and it was a virtual ghost town with dozens and dozens of stores and restaurants closed and out of business.

READ MORE: Do you know what the actual poverty levels are for different sized families? Here is a table that provides that information.

A record number of more than 94 million people are no longer in the workforce.  The percentage of employable males between the ages of 25 and 54 who are unemployed is around 12%, up from 6% in 1980. Today, only 44% of Americans consider themselves to be “middle class”, down from 53% in 2008, and, incredibly, 49% believe they are “lower class”.

The average age of a worker earning just minimum wage is 36. 52% of American workers make less than $30,000.No wonder American families are hurting.

READ MORE: Coping with a personal financial crisis? I wrote this just for you.

Bottom line: Americans are earning less and working less.  Jobs have simply disappeared, and this leaves millions of us more vulnerable than ever to an economic collapse.

The saddest ending of all

A slow decline of a society is more sad and tragic than a sudden collapse.  After all, what is the more awful to watch, an animal dropping dead from a single rifle shot or one that lumbers along in pain from a not-quite-mortal wound, finally dropping, exhausted, miles away? At some point in the future, we’ll wake up and realize that our country has been lumbering along and has finally collapsed.  TEOTWAWKI isn’t always sudden.  Sometimes it’s slow and sad.

Back when Russia was the USSR and the Iron Curtain was firmly in place, I traveled through such glamour spots as East Berlin, Belgrade, and Leningrad (now St. Petersburg).  I was struck by the widespread poverty, from patched up cars from the 1950’s to equally antiquated fashions.  Grocery stores were virtually empty, the scarce goods available were poor quality, technology was ancient as vendors used abacuses to calculate sales, and only a very few people at the top of the food chain enjoyed the comforts I took for granted.  When I think of a slow collapse of America, this is the snapshot that comes to mind.

Preppers and survivalists will inherit the earth

We are currently in a small window of time in which we can prepare our families for an economic collapse, whether it happens in one day or continues far into the future, “lost decades”, as they say.  The concept of preparedness is based on taking steps before a crisis to insure your family’s well-being afterwards.

Recent reports tell of record numbers of Americans resorting to dumpster diving in order to find food.  Preppers and survivalists with deep pantries filled with buckets of wheat, SPAM, and soup will be spared that indignity!

Here are a few proactive steps to take in the face of an economic collapse.

A final word about an economic TEOTWAWKI

The worst part about an economic collapse is the unfairness of it all, and that brings me to my final and most important tip.  Guard your mind and your heart against bitterness and anger.  Most of the recently unemployed are there through no fault of their own.  Hundreds of thousands of hard working, responsible Americans have lost homes and property because of decisions made by those in government, finance, and business who continue to live in luxury.

Survival begins with a positive mental attitude but anger and resentment consume energy, cause depression, and increase feelings of victimhood.  Instead, make the decision to be proactive and self-reliant.  When you do that, you’ve taken power away from those you resent and have empowered yourself.  That’s a sign of a true survivor who’s ready to face whatever comes. 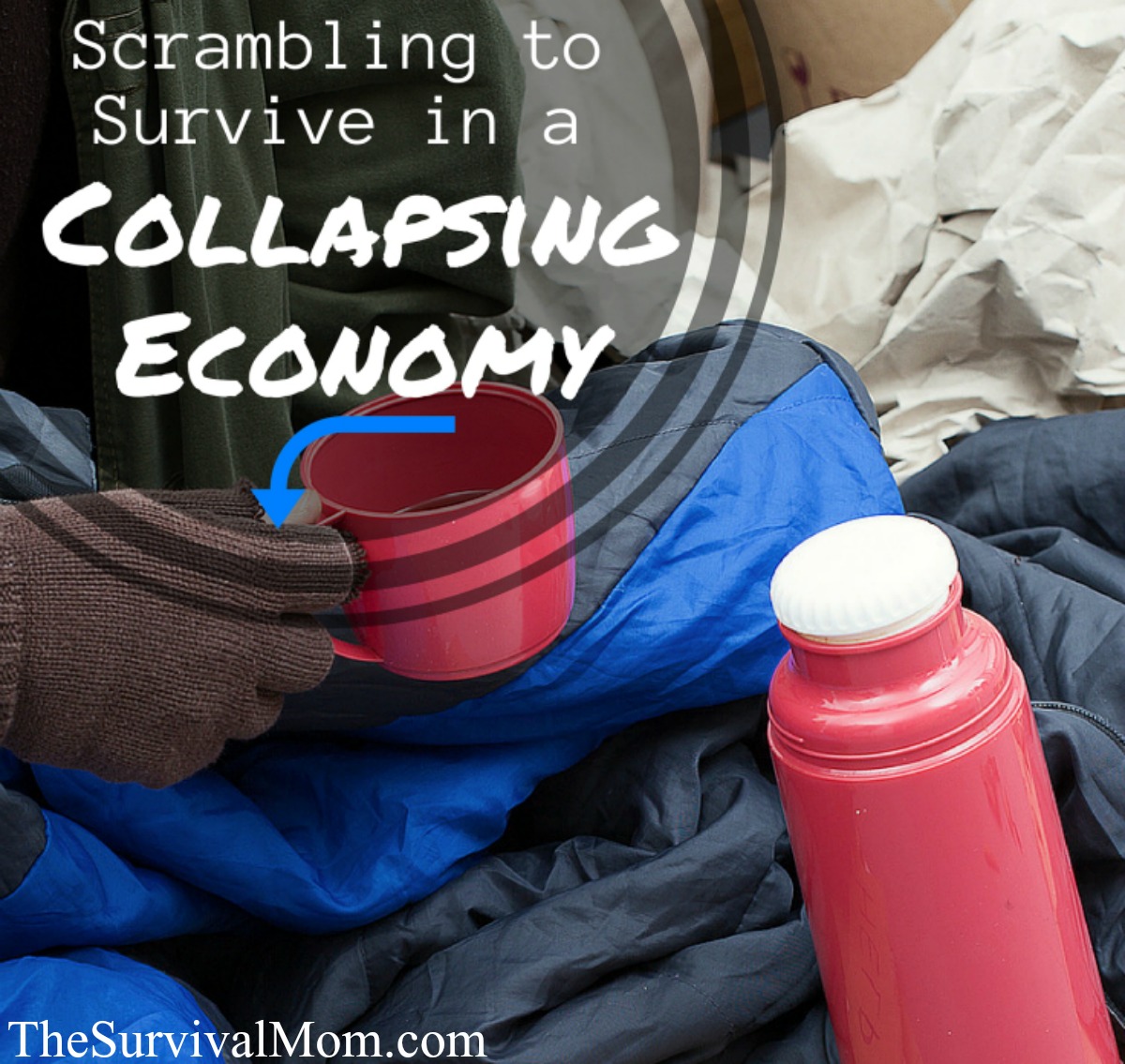