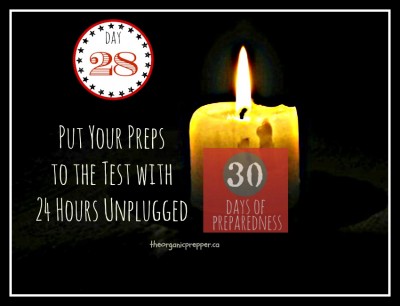 Unplugged: What We Learned From Frequent Power Outages

A grid down scenario doesn’t have to be a massive EMP that detonates over the middle of the country, throwing us back to the 1800s.

It can be as simple (and likely) as a winter storm, a hurricane, or a computer issue at your local power station. While this is a fairly common occurrence, many people still seem taken completely by surprise when it happens. Without back-up heat, cooking methods, and lighting, the unprepared family could be in for a very unpleasant time until the lights come back on. Every family should be prepared for a minimum of two weeks without power.  Not-so-fun fact: nearly 2000 families were still without power 94 days after Superstorm Sandy hit the East Coast.

Here’s why you should test your preps.

A couple of years ago, my youngest daughter and I spent a year in the North Woods of Ontario.  It was a grand adventure, totally different from the city life we’d had previous to this.  Our small cabin was on the banks of a beautiful lake and the edge of hundreds of acres of forest wilderness.  It was heated only by wood, and although we had electricity, we were warned that it was sporadic, since we were fairly remote and regular maintenance was not always performed on the lines of the area.

As a prepared family, we were pretty sure we’d be just fine when the power went out.

The first time it happened was on a mild early autumn morning. The power went out for no apparent reason, and we high-fived each other. Game on!

Since it was afternoon and the weather was nice, it really wasn’t much of a challenge. The power returned before daylight, we had some stuff in the fridge for sandwiches, and we basically just needed to entertain ourselves sans grid. No big deal – we are bookworms, so we spent the day curled up with some good reads.  We did make one unexpected discovery – our well was pumped by an electric component, so when the power went out, we also had no running water, including water to flush with.  Of course, we had stored drinking water, and we brought a couple of buckets of water up from the lake for flushing, so this was a minor inconvenience.

However, it did get me thinking about how we would flush if the weather was cold enough that the lake was frozen, but there wasn’t snow on the ground.  Hmmm…#1 Note to Self – store water for flushing too!

The next power outage occurred a couple of weeks later and it was a much bigger deal. The initial outage hit at about 7 o’clock on a chilly fall evening. It was dark and cold. We stoked up a fire in the woodstove, and began to search for our lighting solutions. Unfortunately, I hadn’t had the forethought to set up off-grid lighting in each room, so after digging for my candles in the dark closet, I had to carry one around to light candles in subsequent rooms.

#2 Note to Self: Keep candles, holders, and lighters in each room in a place which is easy to access in the dark.  After this, we placed candles in holders are part of the decor all around the house.

The wind roared around outside the cabin and our power did not return for 3 days.  We used the woodstove to heat up meals, but we couldn’t find all of the bits and pieces for a game we wanted to play. #3 Note to Self: Keep off-grid entertainment well-organized, especially if there are children in the house.

On the second day of the outage, we dragged our chest freezer out onto the deck to keep our food from going bad in the cozy cabin. #4 Note to Self:  Get something sturdy to store food in outdoors

that won’t draw wild animals to your porch that also doesn’t require you to drag a 200+ pound appliance outside.

By the time the next power outage rolled around, we had learned many lessons. At the first sign of windy weather, we immediately filled the bathtub. A bucket right beside the tub served as a container to transfer water from the tub to the toilet so that we could flush. A sturdy Rubbermaid storage bench with a lock resided on our deck, waiting to be pressed into duty as an outdoor freezer.  Each room boasted of decorative candles.  Home canned meals in jars lined my kitchen shelves, and a beautiful cast iron Dutch oven

sat at the ready to simmer a delicious stew or pot of beans on the woodstove. A couple of pretty baskets were filled with art supplies and games (with all of their pieces) and a couple of kerosene lamps that were bright enough for reading sat at either end of the sofa.  Since the fans that blew the heat into the bedrooms obviously did not work without power, we had a couple of air mattresses to set up in the living room on the coldest nights, so we could stay cozy by the fire.

The next time the power went out, we were excited because it meant a break in our day-to-day routine of work and school.  Power outages had become mini-vacations, and were no longer even a blip on the radar for us.

We don’t live in our little cabin in the woods anymore, but the lessons we learned allow us to take power outages in stride in a way that most people don’t. Even though we don’t expect a shaky grid where we live now, our home is organized in the way that we learned up North. Lighting, extra water, sanitation, cold food solutions, and off-grid cooking tools are all close at hand should they be needed.